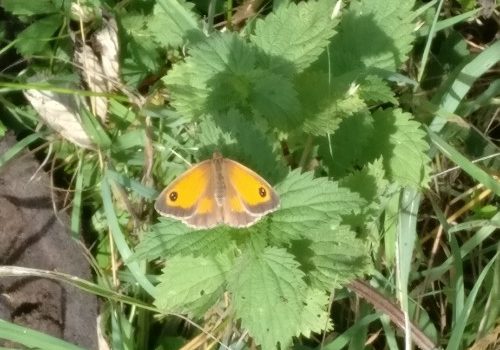 The new year got off to a great start on 4th January with a Raven seen flying over calling, heading SW at approx 14:30. I believe this is the first record for Swaines Green, although it has been recorded at Copped Hall in the past few years. These iconic birds are at last slowly coming back to Epping Forest having died out in Essex in the 1890s.

By 23rd January it had turned cold, with light snow cover, and this was reflected with 3 Bramblings, 12 Fieldfares, 1 Mistle Thrush (the first recorded for many months), and 1 Green Woodpecker. Then in early February Martin reports that a Woodcock was flushed – the first recorded this winter.

Through the first quarter of the year, there were several sightings of both Red Kite and Buzzard, culminating with three Buzzards soaring together on 18th March, looking like a pair plus an interloper involved in a territorial dispute, and then on the following day, three Red Kites also soaring together, before a presumed pair then left towards NW and the other towards SW.

On the comparatively late date of 4th April, 15 Fieldfares were seen feeding on the fields adjacent to Swaines Green, with a Buzzard and a Kestrel also seen, a couple of singing Skylarks and at least three singing Chiffchaffs; and on 7th there were two Redwings. On 26th, there was another Red Kite, with  4 Linnets, 2 Ring-necked Parakeets, 130 Wood Pigeons (incuding 101 feeding on the adjacent school playing field), and a singing male Lesser Whitethroat amongst others seen.

In May and June, a partial breeding birds survey was conducted, and the results of that are shown in a separate post. Birds seen here but not believed to be breeding included a pair of Kestrels (one carrying food to the other, so clearly an established breeding pair somewhere close by), a Nuthatch (the first at this location for at least a year), and further fairly regular sightings of Red Kite and Buzzard, so clearly both of these species also breed in the vicinity, though not sadly at Swaines Green itself.

Of the larger mammals, Rabbits certainly bred with baby bunnies seen, Grey Squirrels likewise, Foxes probably bred, and a Muntjac Deer was seen with a fawn in Lovelocks Meadow. Butterflies abounded in high summer and the common species were noted. A butterfly expert is needed to conduct a more detailed survey!