On 25th January the wintering Linnet flock was counted to be 36 strong, and they were joined by a nice male Brambling.

This winter was notable for a nationwide influx of Hawfinches, and on 26th February, two were seen at Swaines Green, in Lovelock’s Meadow. Thirty minutes later, two were seen in Middle Lincolns Field – we can only speculate if these were the same two or different birds. Either way, this is the first record for Swaines Green, although doubtless they have occurred here unrecorded before.

Other notable numbers on 26th February included 3 Buzzards, a Redwing, a Bullfinch, and 18 Goldfinches.

Then the ‘Beast from the East’ struck, and on 28th February with snow cover, a Little Owl was seen on Bolt Cellar Lane close to Swaines Green, and a Green Woodpecker was also recorded.

On 28th September a Sparrowhawk was seen, and there was also a Green Woodpecker, a Chiffchaff, and a flock of 10 Linnets.

Visits in October revealed a 3 Jays and a Pied Wagtail on 4th, with a flock of 30 Linnets; a couple of Mallards at the pond on 25th, with two Pied Wagtails, a Green Woodpecker and 14 Magpies and a Buzzard; and a Kestrel on 28th.

On 8th November there was a mixed flock on adjacent newly tilled fields including 80 Black-headed Gulls, 17 Common Gulls, 1 and a Lesser Black-backed Gull. Other birds recorded included 2 Buzzards, 122 Jackdaws, 18 Rooks, 16 Magpies, 3 Jays, 1 Redwing, and a handful of Chaffinches, Greenfinches and Goldfinches. By 29th November, there was a Fieldfare and the Redwing numbers had built up to 15.

Mild weather at the beginning of December revealed on 7th a flock of 40 Linnets, and there were also 12 Blackbirds and a single Redwing. Also seen was a Great Spotted Woodpecker – the first recorded this year.

Finally, on 28th December at dusk, a large Corvid roost had built up in Forties Field: at least 50 Magpies and 300 Jackdaws. There was also a Thrush roost in Lovelocks Meadow, with 50 Blackbirds, 15 Fieldfares and 25 Redwings. Also a Sparrowhawk flew into Lovelocks in the late dusk carrying a large rat!

Summary of bird sightings for 2018

Register to get notifications of news and events. 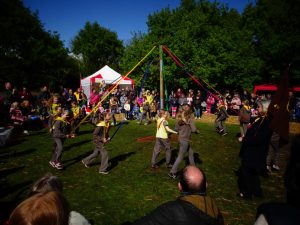 The next May Fayre will take place as usual on the Bank Holiday weekend Saturday. Expect lots of stalls selling crafts, plants, food and drink, and a packed programme in the arena! More details when they become available.Share this:FacebookTwitter
View Calendar
Add
This website uses cookies. by continuing to use this website you agree to their use. For more information see here: Cookie Policy