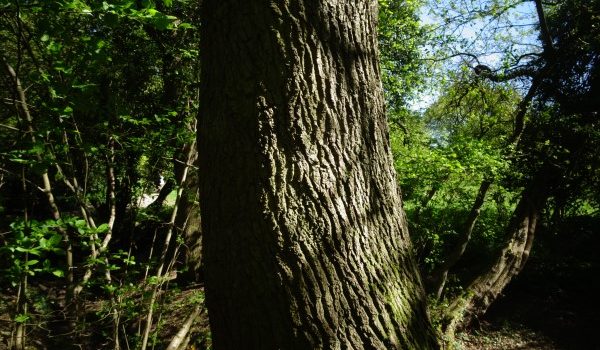 Have you ever wondered how old is the oldest tree at Swaines Green? Almost certainly an oak, as these are one of our longest lived native trees. There are maybe half a dozen mature oaks at Swaines Green, particularly along the edge of Bolt Cellar Lane, but the oldest may be the one near the bridge between Forties Field and Middle Lincolns Field, on the stream bank.

The age of an oak can be estimated from the circumference of its trunk. It’s not easy measuring an oak tree’s waistline! This particular oak measured 4.36m, and using the Woodland Trust’s conversion table indicates it is around 240-250 years old. That’s not bad as oak trees go, although they can reach 300-400 years.

That means our oak was a sprouting acorn in the early years of the reign of King George III. It was still a sapling when Captain Cook discovered New Zealand and Australia, and when America declared independence.

It has seen the Victorian era, survived the mass clearance of most of the former extent of Epping Forest, endured the worst of the Victorian smogs, and been a silent witness as the modern era unfolded.

It has stood through countless gales, including the great storm of 1987, and played home to countless wild creatures in its branches. Perhaps it has sheltered many animals no longer found here: it would have been standing when there were still Red Deer and Wild Boar on the fringes of Epping, and Polecats might have chased Red Squirrels through its branches.

Let’s hope it continues to give us pleasure for a hundred and more years to come!